The circuit of the amp his been detailed in the first two parts down to each component. What has not been covered yet is the power supply. So let's concentrate on this now. The requirements have already been set. The B+ is about 425VDC. It has to supply both channels. Each output draws 70-75mA. The drivers take 6-7mA each. The bleeder resistors swallow another 15mA. That sums up to almost 200mA.

Basically any power supply which can deliver these voltages at the given currents will do. But of course we will also propose a good solution to go with the circuit as presented in the first two parts.

Some deviation from the targetted 425V is not critical. This can move up a bit, as long as the max plate dissipation is not exceeded. The plates of the 6CB5A will start to glow red if they are beyond their maximum. In that case reduce the B+ voltage until the glow disapears. If you cannot reduce the voltage in the supply, you can dial down the current by increasing the cathode resistor.

The heater voltage should be as close as possible. I'd rather have the voltage a bit below than above the nominal 6.3V. Anything between 6 and 6.3V is ok.

As has been mentioned in the first part, we don't want the average cheap PSU, but something nice, yet affordable. So let's go for a classic choke input filtered supply with tube rectification. The choke input supply has some advantages. Voltage regulation is better compared to cap input. Current draw is spread over the whole conduction angle of the diodes rather than in pulses as with cap input. This means less current spikes with the potential to creep into our amp circuit. Also the rectifier and transformer have to deliver smaller current amplitudes and get less stress. But nothing comes for free, there are also disadvantages. The resulting DC voltage is much smaller at a given secondary voltage, about 0.9 times the secondary voltage versus the theoretical maximum of 1.4 times secondary voltage for cap input. The first choke needs to be rated for choke input duty, otherwise it can exhibit mechanical buzz.

Since we have chosen unusual and low cost tubes for the amp circuit, we will do the same for the rectifier. So we stay clear of the typical rectifiers seen in audio amps like GZ34, 5AR4, 5U4, etc. Looking into the TV tube arsenal we find the so called TV damper tubes. These have been developed to damp oscillations in the electron beam defelection system of TVs during the fly back of the beam. For this application they need to be capable of high current pulses and very high peak inverse voltages. There is an abundance of TV damper diodes with various bases, like 6AX4, 6AU4, 6CJ3, 6CG3. Unfortunately they are all single diodes, so two are needed for a full wave rectifer. But there is one exception. The 6BY5 contains 2 diodes in one tube. It has an octal base, so all tubes in the amp will use the same socket, which is a nice touch. Another good point is it's low cost. It lists for a few bucks in the catalogs of all major tube dealers. It's specs indicate more than enough current capability and peak inverse voltage rating. So let's use it. 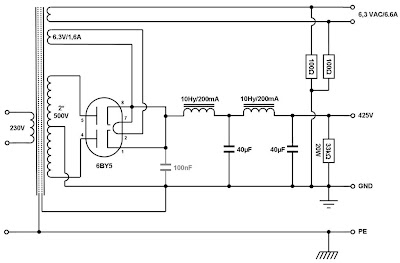 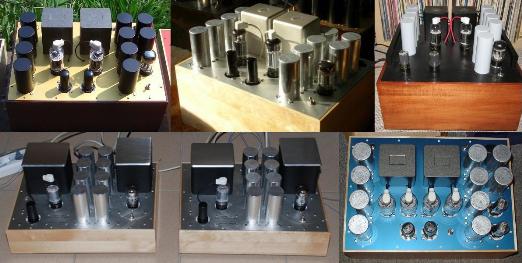 The top row shows implementations with Tango, James and Hashimoto transformers. The second row shows a pair of monoblocks using Lundahl tranformers and the blue one is a Push Pull version, again with Tango.
The last picture shows an amplifier based on the very same circuit but with the power supply separated into an external chassis. There is a minor difference in the power supply though, instead of a 6BY5, two 6AX4s are used as rectifier. Both interstage and output transformers are Tango. NC20F interstage and FC30-3.5S output transformer: