As mentioned in the first part of this series, this amplifier concept can be scaled down for a low cost version. Although this will impact the sound quality the scaled down version will still perform very nicely. There are three areas which we can look at to reduce cost: capacitors, interstage transformer and power supply. The basic concept of such an amp has already been shown in the first part.

Instead of an interstage transformer, the more common RC coupling can be used. The interstage transformer will be replaced by a plate load resistor and a coupling capacitor. A 50kOhm resistor will work nicely. This resistor will dissipate some power so it should have at least a 10W rating. Two 100k resistors can be used in parallel. If you want to use a single resistor, a 47kOhm will work just as well. The grid of the output tube will need a resistor to ground. The datasheet of the 6CB5A gives 500k max for this resistor. A coupling cap of 220nF or higher will provide a very low roll of frequency with this 500k. Obviously the quality of the coupling cap will have a large influence on the sound. A good MKP type is what should be used. Expensive 'boutique' caps should be avoided however. This is a cost down amp, so an expensive cap would not fit into the concept, we could rather stick with the interstage transformer. The voltage rating of the coupling cap should be chosen such that it can withstand the maximum voltage which can appear at start up or during fault conditions. It should be 450V or higher.

Here is the detailed schematic of the 'low cost' amp with all parts values and approximate voltages: 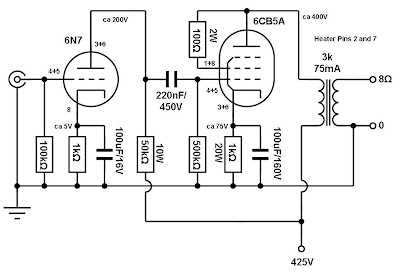 Both stages and both channels use a single common filter cap, which is shown in the PSU section further down. Since we are not applying the ultrapath concept in this version, the cathode resistor of the 6CB5A needs a bypass cap as shown. Also the driver stage uses a cathode bypass cap. Otherwise the gain would be lower. Gain is already reduced by about 3dB compared to the transformer coupled version, so let's not reduce it further by omitting the bypass cap. We also want to keep the output impedance of the driver as low as possible. All other parts remain the same as for the transformer coupled version.

The power supply also offers some possibilities to reduce cost. A capacitor input filter will simplify the PSU since it requires less secondary voltage from the transformer. But we want to keep at least one choke in the supply. Going to a solid state diode bridge for the rectification will reduce complexity of the power transformer further, since it only needs one heater winding and the HV voltage does not need to be center tapped: 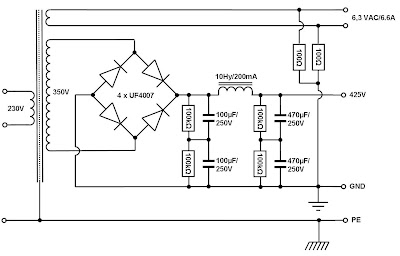 Just two windings on the power transformer, a Single 350V winding which should have at least a 300mA rating. As mentioned above, the capacitors can be electrolytics. They need to be of sufficient voltage rating of 500V minimum. We need the voltage rating to be above the B+ level since the voltage will rise somewhat in case the PSU is not loaded. not as much as a choke input filter though. Since 500V electrolytics are difficult to find, a series combination of 2 250V or 350V capacitors will do. If you use series combinations for the caps, each needs a resistor in parallel to equalize the voltages as shown in the schematic. These should be 2W types or higher. They serve at the same time as bleeder resistors which ensure a save discharge of the PSU when turned off. If single capacitors are used rather than series combinations, a separate bleeder resistor should be installed. It is not important to have the exact capacitor values as shown in the schematic. Anything which is in the same range will do.
You might want to experiment with film bypass caps across the electrolytics. I myself am not fond of bypassing. It can create more colorations than advantages. But that is another topic. You can experiment as you wish. But keep in mind this is a scaled down version, so probably a better path for upgrading will be to change to interstage transformer and oil caps.
Of course any mixed form between this RC coupled and the transformer coupled version can be built. As shown the cost of this version is about 50%. For example you can start with the RC coupled driver but immediately apply the oil caps and ultrapath concept in the output stage. This way less changes will be necessary when the amp gets upgraded later on.
Actually by far the most 6CB5A amps I know of have been built in the transformer coupled version. In fact I got many questions about how the concept can be improved rather than scaled down. In the coming installments of this series I will show some beefed up versions with Tango transformers and a yet improved power supply.
Best regards
Thomas
Posted by VinylSavor at 14:40