The concept of the amplifier has been defined in the first part. Now I will write a little about the search for a suitable driver tube. Also the concept will be detailed further with values for supply voltages and passive components.

To have all requirements for the driver tube, we need to know the voltage swing and gain it has to deliver to drive the outout stage to full power with reasonable sensitivity. So let's flesh out the details of the output stage first. Since the 6CB5A is fairly cheap and can be expected to be very robust as is common with TV tubes, we have no fear to run it at maximum plate dissipation. Laying load lines on the plate curves and experiments with a 6CB5A in a prototype mock up came up with about 350V from plate to cathode and 70-75mA plate current. This requires about -70 to -75V on the grid. A 1kOhm cathode resistor will provide the correct operating point. This means the amp needs to be fed with a B+ voltage of about 425V.

A bias voltage of 70 V means the output tube requires 140V peak to peak for full power. This translates to about 50V RMS (amplitude of the signal divided by the square root of 2). In my post about gain, headroom and power I already wrote about the preference of having not too much gain, so I would shoot for a input sensitivity between 1V and 2V RMS. This means we need a gain of 25 to 50 from the driver stage. This is a bit above the gain which the common 6SN7 would deliver, so let's look for something else. Choosing the one of the most widely used driver tubes would be boring anyways. We also want something which is not too expensive.

The driver tube needs to be able to drive an interstage transformer so it cannot have a plate resistance which is too high. Brwosing through the databooks came up with two interesting types: the 6AM4 and the 7F8, the latter is a double triode with a common cathode, so both sections would need to be wired in parallel. The 6AM4 would even provide a higher gain than targetted, around 80. The 7F8 would be 38. 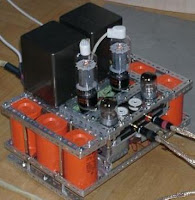 I had some suitable output transformers lying around, A pair of Tango XE-20S. As interstage transformer the Lundahl LL1660/10mA could be used. A prototype was built with components out of the parts bin.

The prototype had two sockets wired in parallel for a quick comparison of both the 6AM4 and 7F8 as drivers. As caps I used 25uF MKP types.

The Tango XE20S is a universal type which allows to select primary impedances of 2.5, 3.5 and 5kOhms. 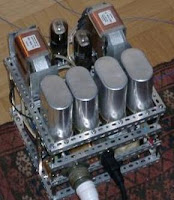 For the power supply I reused something which I had assembled for another project. It allowed selection of different B+ voltages. It got set up for the required 425V. It also delivered the 6,3VAC for the heaters of 6CB5As and driver tubes. All heaters got wired up in parallel and referenced to ground via two 100 Ohm resistors.

A group of people got invited for the initial listening. Some other amps were also available for direct comparison. Among them a 300B amp, a PP 46 and also a very elaborate 801A amp.

The amp was an instant hit. It sounded much much better than I would have expected or hoped for. It instantly beated the SE300B and PP46 amps. It had no chance against the 801A amp which was built with 4 times the budget for parts. This was very encouraging and sparked quite some interest among local DIYers. The owner of the 300B amps immediately decided to sell them and switch to 6CB5A.

Before I started to rebuild the amp in a nicer chassis, I spent some more thought on the driver tube. Although the 6AM4 and 7F8 both performed quite well they did not have enough headroom. It was just ok for transformer coupling but would not have been enough for RC coupled versions. So back to browsing the databooks. The 6N7 caught my interest. It would provide similar gain as the 7F8 but more headroom, enough to also use it RC coupled. It is quite linear and has an octal base as the 6CB5A. It is a double triode with common cathode like the 7F8. The prototype got modified for the 6N7 as driver. It has a max plate voltage of 300V so B+ needs to be dropped via a resistor form the output stage. This also serves as decoupling together with a capacitor. A 1kOhm cathode resistor gives an op point of about -6 to -7V on the grid, 6-7mA. That's a good 9-10dB headroom in the driver stage.

A listening test confirmed that the 6N7 was a much better choice as driver. The amp got more refined, more neutral than before, retaining all the sonic qualities which it shares with other excellent single ended concepts.
Now it was time to build a 'serious' version of this amp. Capacitors should be upgraded to oil types. For this purpose I selected ASC X386 series caps. 30uF/440VAC types. Since there was enough interest from other DIYers, I specified a heavy duty power transformer and got a batch of them wound from a local manufacturer. The power transformer was spec'ed such to allow some flexibility for adjustment of the voltages and flexibility to use other tubes as well.

Here is the schematic of the signal section of the final version of the amp with all component values and approximate voltages. No need for 1% parts. Also the exact voltages are not critical. The design has enough headroom to allow for some leeway there. 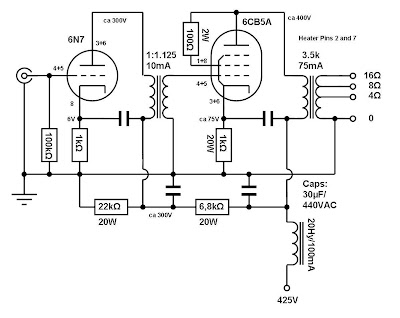 Let's go through each component and clarify it's purpose and value. Starting at the amps input, we see a 100k resistor to ground. This is providing a reference for the grid of the driver tube and a path to ground. The maximum allowable value for the 6N7 is 500k. 100k is a good value which will present an easy load to almost any preamp. This value can be lowered or increased, 47k or 200k would be fine too. No speacial wattage needed here, 0.5W is fine. This amp is DC coupled at the input. Some amps cap couple the input to provide protection if the preamp has some offset. This amp is fairly insensitive to DC offsets, even a offset of 100mV would not do any harm. If a preamp has more offset it should be replaced anyways. So let's avoid a cap in the signal path here. If you want to have DC protection however, don't hesitate to put one in. Many amps also make excessive use of grid stopper resistors. I left them out. These are not needed for lowish transconductance tubes like the ones in this concept. With careful layout there will be no danger of parasitic oscillation. Again, if you feel better with grid stoppers, put some in. But don't exaggerate. a few 100 Ohms is enough.
The 6N7 has both cathodes wired in parallel, the pin numbers are indicated in the schematic. A 1kOhm cathode resistor takes care of the setting of the operating point. 0.5W or higher can be used for the cathode resistor. What is not shown in the schematic is the connection of Pin 1. This Pin is connected to the envelope if a metal verison of the 6N7 is used. Pin 1 should be connected to ground. Another nice touch about the 6N7 driver: If you compare it's pinout to the 6J5, you will realize that they are interchangeble. The 6J5 will bias up correctly in the same circuit if dropped in. It will just lower the gain. So if there is too much gain in the system, the 6J5 is an easy way to reduce it.
The interstage transformer is a Lundahl LL1660/10mA it is wired 1:1.125 (connection alternative S in the datasheet). The 6CB5A does not need a grid to ground resistor since the secondary of the interstage transformer provides a ground path. This path is very low in DC resistance. In case the output tube is overdriven, which causes grid current it is routed to ground through this low DCR path. This allows the amp to recover quickly from overload conditions. You can experiment with a grid resistor which will terminate the transformer. This usually improves the square wave response. Sonically, I prefer to run transformers unloaded whenever possible.
The 6CB5A is biased with a 1kOhm cathode resistor. Here a high wattage type is needed, 20W or more. This is because of the high voltage across the resistor. It gets quite hot! The 6CB5A is wired in triode mode, the screen grid is connected to the plate through a 100 Ohm screen stopper resistor. Place this resistor as close to the pins as possible.
The output transformer can be any type between 3 and 5 k primary impedance which can be run with 70mA DC. Suitable types: Tango XE20S, Tango FC30-3.5S, Lundahl LL1663, LL1664, LL1682 and others. There are also types from winders like Tamura, Hashimoto, James and many others which would fit.
As mentioned above I selected ASC X386 MP in oil caps. All values are 30uF/440VAC. These caps sound excellent in this amp, better than the MKP types used in the first prototype. Any other cap of similar value and sufficient voltage rating can be used. The exact cap value is not critical. Also higher capacitances can be used.
The 6,8k/20W resistor provides dropped voltage to the driver and decouples the driver supply with the cap following it. The 22k resistor to ground from the driver supply acts as voltage divider together with the 6,8k and as bleeder resistor. It will ensure that the power supply is always discharged when the amp is switched off.
In part 3 I will describe the power supply and also show some photos of the assembly process of the amp.
Stay tuned!
Best regards
Thomas
Posted by VinylSavor at 01:45